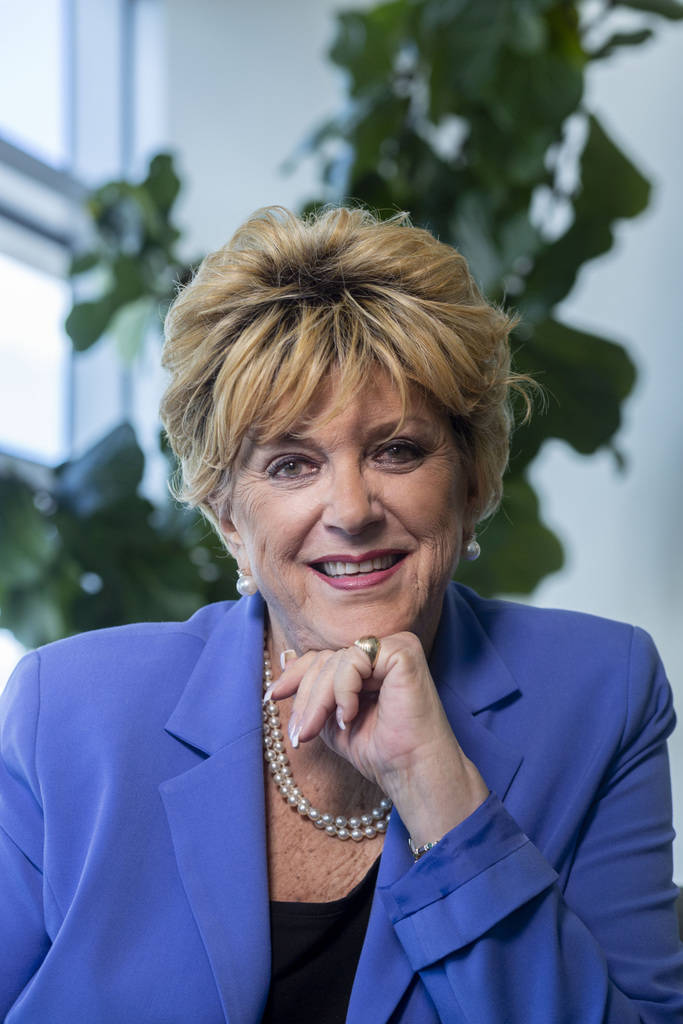 Carolyn G. Goodman became the mayor of the city of Las Vegas on July 6, 2011. Her husband of more than a half century and 12-year, term-limited mayor, Oscar B. Goodman, administered the oath of office. It is the only known instance of a spouse succeeding a spouse as mayor in the United States. In 2015, Mayor Goodman was handily re-elected to another four-year term. In 2019 she was elected to a third term, garnering more than 80 percent of the vote.

Among her priorities as mayor, Carolyn has championed improvement in inner-city schools pushing for early learning preschool programs, tutorials for ESL students and their parents, bringing together a coalition of public, private and nonprofits partners to participate in the achievement based and measurable educational initiatives. In a county in which all public education is controlled by an independently elected Board of Trustees and implemented by a superintendent, her role continues to be through the bully pulpit. The mayor helped accomplish the passage of a long-awaited Nevada Film Tax Credit in 2013, which is expected to bring significant new film investment and jobs to Nevada. She has spearheaded efforts to formalize policies for the new food truck industry, curb underage drinking downtown and update related Las Vegas Municipal Code provisions.

She has been a galvanizing force for bringing together the nonprofit social service agencies in southern Nevada to create a collaborative and establish a valid database of 501[c][3]s for donor evaluation. She currently serves on the board of this nonprofit. Carolyn has been an advocate of Las Vegas’ $44.9 billion tourism industry and is a board member on the Las Vegas Convention and Visitors Authority. She also serves on the Las Vegas Global Economic Alliance (LVGEA), Las Vegas Events, the Southern Nevada Tourism Infrastructure Committee, the Regional Transportation Commission, the Transportation Safety Commission and the Clark County Regional Flood Control District. She is chair of the Las Vegas Redevelopment Agency and serves on the UNLV Medicine Community Advisory Board; the Governor’s Technical Advisory Committee for Clark County School District Reorganization; the Governor’s Commission on Tourism; and the U.S. Environmental Protection Agency (EPA) Local Government Advisory Committee. She is a founding member of the UNLV School of Medicine Community Engagement Board.

The mayor also serves on the Blue Ribbon Committee for Clark County Child Welfare Services. Additionally, she holds national leadership roles as a member of the United States Conference of Mayors (USCM), is a member of its Advisory Board, vice-chair of its Task Force on Education Reform, and serves as the Chair of the Mayors’ Business Council. In June of 2013, she hosted the 81st annual gathering of the National Conference of Mayors in Las Vegas. The USCM honored her with the Mayors’ 2014 Large City Climate Protection Award.

Carolyn is well known in the Las Vegas community for founding The Meadows School in 1984, Nevada’s first nonprofit, college preparatory school for pre-kindergarten through 12th grades. Carolyn planned and oversaw the entire day-to-day operations for 26 years orchestrating and creating the curricular development; overseeing the budget; hiring administration, faculty and staff; and managing the entire physical plant and fundraising endeavors for the organization. During this time, Carolyn never had ownership of the school as it was incorporated as a 501[c][3] entity. Furthermore, during her 26 years in leadership, Carolyn never took a salary. She retired in June 2010.

Recognized nationally by the Council for Advancement and Support of Education (CASE) and the National Association of Independent Schools in 2006 with the Seymour Preston Trustee Award for Leadership, Carolyn additionally devoted much of her life to volunteerism in Las Vegas. In 1989, the University of Nevada recognized Carolyn with the prestigious “Distinguished Nevadan” award and in 2006 bestowed upon her an Honorary Doctor of Laws degree (PhD). In 2010, UNLV announced her as Alumni of the Year in Education. She is also the recipient of the Frances Riker Davis Award for public service from her high school alma mater Brearley.

Carolyn and her husband moved to Las Vegas from Philadelphia in 1964 as relative newlyweds arriving in August with only $87 between them. Initially, Oscar (a member of the Pennsylvania Bar) worked for the District Attorney’s office while Carolyn began work in the hotel industry. Prior to that, she worked as a vocational counselor in West Las Vegas for the Department of Labor training and building employment opportunities for African Americans in a then-segregated city. While her husband traveled the country (establishing what became an outstanding criminal law career winning high-profile cases), Carolyn raised their four infant children while simultaneously earning a master’s degree in counseling at the University of Nevada, Las Vegas.

Carolyn has served the people of Las Vegas by volunteerism and therein in leadership in many community nonprofit boards, charities and service organizations. She has proven her deep commitment to the community and continues to be devoted to the highest quality of life for all southern Nevadans by her efforts and dedication.

Her children have gone on to be extremely successful, each of whom went on to graduate schools out-of-state and each of whom has now returned to live in Las Vegas and raise their own families (six grandchildren to date). The eldest son, Oscar Jr., is a MD/PhD specializing in the clinical treatment of and research for prostate cancer and oncology. His doctoral degree is in molecular pharmacology and structural biology. The other two sons, Ross and Eric, are both attorneys. Ross is a retired Major in the U. S. Marine Corps and serves in private legal practice in Las Vegas. Eric is a third generation alumnus of the University of Pennsylvania Law School and is currently a Las Vegas Justice of the Peace. Daughter Cara began working in human resources consulting and information technology after completing her undergraduate and graduate studies at Stanford University in Human Resources. She completed a second master’s degree in Marriage and Family Therapy and works in the burn and trauma units in the public hospital.

Born and raised in New York City, Carolyn attended and graduated from Bryn Mawr College where she served as Student Government President and earned a degree in Sociology and Anthropology.